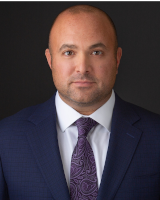 Jonathan Merel is an experienced attorney who advocates for his clients in all divorce and family law proceedings, including settlement negotiations and trials. Jonathan founded the Law Offices of Jonathan Merel, P.C. in early 2009 after working for many years at another family law firm in Chicago. Through his hard work and unwavering dedication to his clients, Jonathan has quickly grown the firm to become one of the premier divorce and family law firms in the Chicagoland area.

Jonathan has a great deal of experience in obtaining favorable outcomes for his clients in multi-million dollar marital estates and contested custody suits (custody is now known as the allocation of parental responsibilities in the State of Illinois). His ability to settle heated divorces and custody disputes has gained him a great deal of respect from fellow attorneys and judges within the Chicagoland legal community. When settlement is not a viable or reasonable option, Jonathan’s experience as a zealous litigator in the courtroom has produced outstanding results for his clients.

Always committed to his clients and their causes, Jonathan’s philosophy is to build strong, trusting relationships with his clients, founded on compassion, sound legal strategy, and open and frequent communication. Known as a skillful and aggressive negotiator with strong tenacity, Jonathan has an impressive track record of protecting his clients’ best interests and helping them meet their legal goals.

Jonathan has received numerous awards and achievements as a result of his success.

Jonathan has been consistently named as to the Illinois Super Lawyers® lists since 2012. Super Lawyers is a rating service of outstanding lawyers from more than 70 practice areas who have attained a high-degree of peer recognition and professional achievement. The selection process is multi-phased and includes independent research, peer nominations, and peer evaluations.

Since 2015, Jonathan has been annually selected by his peers for inclusion in The Best Lawyers in America® in the field of Family Law. Since it was first published in 1983, Best Lawyers has become universally regarded as the definitive guide to legal excellence. Best Lawyers is based on an exhaustive peer-review survey.

In all years since 2015, Jonathan has received the prestigious honor of being selected as a Leading Lawyer in Illinois by the Leading Lawyers Network; an award bestowed upon less than 5% of all lawyers licensed in each state.

Commencing in 2017 and in each year thereafter, Jonathan has received the Nation’s Top One Percent designation by The National Association of Distinguished Counsel; an award received exclusively by the top 1% of attorneys in the United States.

Jonathan has also provided his legal skill to prominent national media outlets such as the Wall Street Journal and NBC’s Today Show.

At the Law Offices of Jonathan Merel, P.C., we specialize in providing legal services to our clients in all aspects of divorce and family law. Attorney Jonathan Merel, who has made his reputation as an accomplished attorney through the practice of family law, founded the firm in 2009 after practicing for many years at another family law firm. Jonathan, his associate attorneys, and the firm’s staff take great pride in affording clients the attention they deserve and obtaining the results they expect from one of the elite family law firms in the Chicagoland area.

With our main office located in downtown Chicago and a convenient suburban office location in Skokie, the Law Offices of Jonathan Merel, P.C. practices in all counties within the Chicago vicinity.