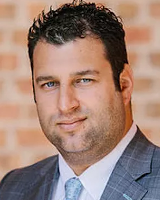 Ronald R. Petroff was born in Cleveland, Ohio and graduated high school from the University School in Hunting Valley, Ohio. He attended Vanderbilt University as an undergraduate where he earned a bachelor’s degree and double majored in Political Science and American History. He graduated cum laude and was a member of the Sigma Chi fraternity. Mr. Petroff then attended The Ohio State University Moritz College of Law where he earned a certificate in Alternate Dispute Resolution and was a member of the National Labor and Employment Law Moot Court Team. Mr. Petroff also was a member of the National Trial Competition Team. Mr. Petroff earned a CALI Excellence for the Future Award for his perfect score in the class, Criminal Law in the Boardroom.

In 2017, Mr. Petroff was named as a Columbus Business First 40 Under 40 Honoree, an honor bestowed upon members of the business community who have achieved great professional and personal milestones.

Mr. Petroff has been voted by the American Institute of Family Law Attorneys as one of the 10 best family law lawyers under the age of 40 in the state of Ohio for 2014 and 2015. He won a similar award from the American Society of Legal Advocates in 2014. In 2015, Mr. Petroff was voted as being one of the nation’s top 1% of attorneys by the National Association of Distinguished Counsel. In 2015, Mr. Petroff was rated by Super Lawyers as a rising star in the field of Family Law. Mr. Petroff has consistently held the highest 10/10 rating on the attorney directory site AVVO and recently won, for the second time, AVVO’s “Client’s Choice” award.

Mr. Petroff is admitted to practice in front of all state courts and agencies in the State of Ohio as well as before the United States District Court for the Southern and Northern Districts of Ohio.

Mr. Petroff is fluent in Russian and is passionate about giving back to the community. After several years living in the Arena District, Mr. Petroff settled in New Albany with his family. In his free time, he enjoys traveling, S.C.U.B.A. Diving, theater, tennis, and cheering on all of Cleveland’s professional sports teams. Mr. Petroff is also passionate about his two alma maters, the Ohio State Buckeyes and Vanderbilt Commodores.

When searching for a Columbus Ohio divorce attorney or child custody attorney, you will find that our team is dedicated, goal-oriented, and our results and reputation in the community speak for themselves. We understand the emotional and financial hurdles divorce presents to you and your family. Our team will work with you each step of the way to achieve a fair and equitable result. You need an attorney you can rely on and a strategy that will work.

Choosing the right family law attorney and team is a critical decision that impacts the outcome of your matter. Our clients expect a legal team that is empathetic, hyper-communicative and, most of all, results-driven. At Petroff Law Offices, we deliver those qualities (and many more) from the very beginning.

No matter which attorney takes the lead on your case, you have access to our entire team’s knowledge, experience, and unparalleled expertise. Our firm can also connect you with a myriad of other professionals you may need throughout the duration of your matter-including financial and real estate experts. We ensure that you have a top-notch team behind you, giving you peace of mind and assurance.